My son, Chase, is moved by music.  Even as a little guy, he would shake his hips like no other and make a rhythm with sounds or by drumming his hands.    I am not one to play an instrument, however, I LOVE all sorts of music.  My home was full of music growing up.  My mother sang to me songs from the Sound of Music at night. We had different types of music on our record player.  I continue to have music and singing as a cornerstone in my parenting as well. 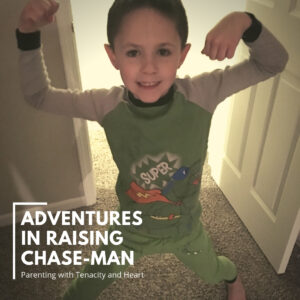 Let me start by saying, raising Chase is full of question marks.  I’m constantly trying to figure out if a tough behavior is from an avoidance, a personal initiative, impulsivity/ inattention or a sensory issue.  It really matters because the cause informs my parenting technique.  Avoidance and personal initiative require a completely different set of skills than impulsivity/inattention and sensory considerations.

My son loves, loves, loves one on one attention (I mean, really, what kid doesn’t thrive with that individual attention).  He is trying all sorts of things to get it.  He’s also avoiding writing time.  He doesn’t like it, however, when assessed, he wrote beautifully (again, thriving within the individual spaces.)

So, you’ve got the background here… It came to my attention that he was becoming disruptive in music class at school.  He said he didn’t understand why they kept doing the same songs and moves.  The music teacher, Ms. Santaguida, expressed her concerns for the upcoming music concert.  I spoke to him about the concert, the reason for the practice, and asked for his cooperation.  I spoke to the music teacher about possible outcomes if he continued to disrupt the rehearsals as these disruptions were beginning to impact the other students’ performances.

As time went on, Chase was able to participate and cooperate to a reasonable level.  It appeared we were good to go.  AND THEN… rehearsal began with the lights, staging, echo of the microphones and the vastness of the gym a week and a half before the concert.

Chase hit a wall.  He had behavior issues all day after rehearsal…  He was arguing with me at home…  His negativity was through the roof.

I was discouraged and frustrated.  I’m reading the notes from school and the emails from teachers.  I’m even having a hard time blocking his negativity.  What is going on?  Based on what was being reported by the school, it appeared to be behavioral.  During the rehearsals, he was talking to other students, bringing toys from home and playing, bumping into other students, and difficulty staying in place.  During the rest of the day, it seemed he couldn’t get back on track… not staying on task during reading, arguing during writing time, getting on inappropriate websites or games during computer time.  Really, kiddo?  Clearly these are only a sampling of what was reported, and this is the kind parts.

When I asked him about all of this, the simple answer was “it was a bad day.”  He wouldn’t elaborate more.  I was racking my brain for what could be going on.  Was is worry about his first concert?  Was he bored?  He was selected for a duet – was it too much pressure? Was he wanting to do his own thing because he was over it – he wanted to move on in learning something new? He loves to be the center of attention and this was not the Chase show, so did he not like being part of a big group? Were people too close to him since it was a group concert?  I really had no idea.

A couple days prior to the concert, I was told that Chase had a complete meltdown in front of the kindergarteners during a practice performance.  He wouldn’t participate, he was poking other students, he was doing his own dance moves instead of what he was supposed to be doing.  I really didn’t understand.

This had gotten out of control.  I’m not there, I’m just getting these horrible reports.  I can’t help my kiddo unless I know more.  This is where having a good, working relationship with the school is helpful.

I spoke with Ms. Santaguida and I shared my concerns.  I expressed that we had a decision to make.  I gave her three options: 1. Chase not perform or come to the concert. 2. Chase do the duet and that’s it. 3. Chase come, watch, learn what is expected, and not perform.  Ms. Santaguida respected my wanting to pull him from the concert and she asked if she could observe from a different perspective.

She called back and shared about his squirrelly behaviors seemed to be coming from sensory responses.  She said she noticed him doing a backbend on the risers and the kids moved away from him – he seemed okay with that… She said he seemed bothered by the lights… She said he covered his ears at times… She said she wondered if the slight wiggle of the risers were contributing too.

Ms. Santaguida saw my child for who he is!  I could just hug her.  I tear up just thinking about this!  She didn’t just respond to his behaviors… She SAW him!  We came up with a plan to have him on the floor where he would be out of the direct light, have different placement with the speakers and be able to move about more easily.  I would talk with him when he got home from school and learn more about his senses.  I would share our plan with him to see if that seemed good to him.

It gets better… When I talked to him, this is what I learned:

I told him our plan and he liked it.

That night, Ms. Santaguida had a place for me and my daughter, Emily to sit to be encouragement and safety for Chase.  He did GREAT!  He came and got hugs after a few songs.  He sang his duet.  He danced and danced and danced. 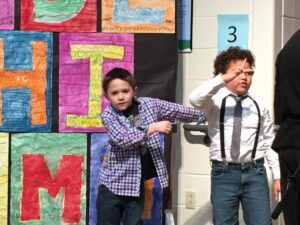 There is nothing simple about raising this boy.  Even though we, the adults in Chase’s life, didn’t quite get it, we eventually got there, to understand what he needed.   He has many factors to consider and it’s really easy to put his responses into the category of oppositional.

With some kindness and observation this amazing educator, he was able to thrive.

Thank you Ms. Santaguida for continuing to inspire my son through your shared love of music!

Stay connected through stories delivered to your inbox, sign up for email updates.  Let’s learn together! 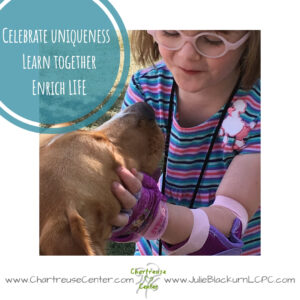